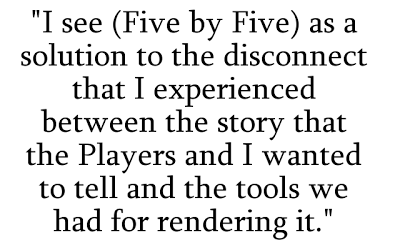 The first customer review for Five by Five is very positive and has me pretty excited.

But, then the reviewer even went so far as to follow up with a personal email to me which I just wanted to share:

I posted the Five by Five review on RPGNow.com. I just want to congratulate you on writing a great game. This is kind of a long mail and probably strange to receive it unsolicited but I just wanted to send it because writing can be kind of isolating and publishing is the payoff. Good writing deserves accolades so... here goes.

I recently had a couple of guys at work ask me to play a game of D&D with them - neither had done table top RPGs before. I haven't played D&D in ages so, against my better judgement I said `OK - we can play D&DNEXT'.

So we sat down last Monday and 2 hours later we're still making characters and I'm thinking `this is why people play MMORPGs.' The barrier to fun in that game is just immense. So... we eventually got to gaming and had a great night.

It was one of those great sessions where you are with players who are not carrying preconceptions or weird roleplayer baggage. Pretty soon they were riffing off each other and doing all kinds of cool things that just did not fit within the character class silos of D&D. So I ended up pretty much ignoring the rules and playing a game of `make stuff up' with d20 rolls and Hitpoints'. My point here is that we came to this after hours of explaining why Wisdom is better than Intelligence for a Ranger, the difference between hitpoints and hit dice and blah blah blah.

Five by Five skips all that. I see it as a solution to the disconnect that I experienced between the story that the Players and I wanted to tell and the tools we had for rendering it.

Thanks Jeff, much appreciated.

This kind of feedback has me really happy!

Today is going to be a good day. 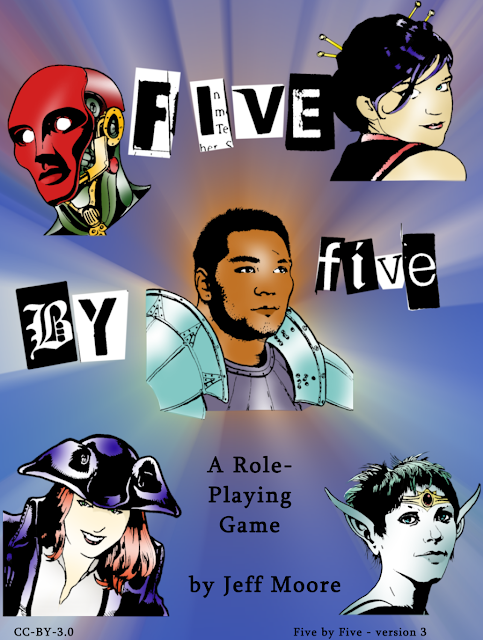 2. Condition or state of being the best you can be; perfect. (slang)

1. An original game system and RPG Toolkit by Jeff Moore.

Five by Five is a “choose your trait” style RPG that makes unique use of six-sided dice to create an easy to learn and easy to play universal game system. The game is flexible enough to satisfy a variety of settings and easy enough to pick up and play right away.

The core of the system is the 5×5 die roll. Players roll two dice (reading a 6 as "0") and multiply the results. This gives an average unskilled person around a 30% chance of success and each rank of skill improves this chance by 5½ percent.

The game includes sample adventures for both a fantasy setting and a superhero game, example characters and a character sheet.